Other Defenders playing in Watford 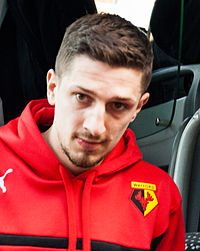 Craig George Cathcart (born 6 February 1989) is a Northern Irish professional footballer who plays as a centre-back for Watford and the Northern Ireland national team. He has also captained his country's under-21 side.