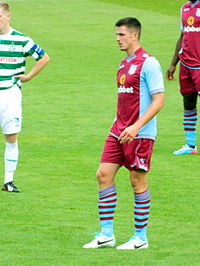 Ciaran Clark (born 26 September 1989) is a professional footballer who plays for Premier League club Aston Villa. Clark is naturally a central defender, but is also able to operate as a central midfielder and at left back.

Clark captained England at under-18, under-19 and under-20 level, but in October 2010 declared his ambition to play for the Republic of Ireland. He was called up to the national team a month later for the friendly match against Norway, and made his full debut against Wales on 8 February 2011.