Other Defenders playing in Arsenal 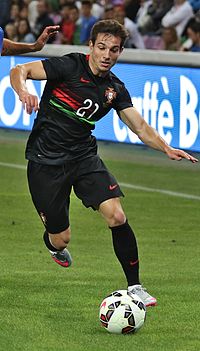 Cédric Ricardo Alves Soares (born 31 August 1991), known simply as Cédric, is a Portuguese professional footballer who plays as a right back for English club Southampton and the Portuguese national team.

His career started with Sporting, going on to appear in 94 competitive games over the course of four Primeira Liga seasons and scoring two goals. He signed for Southampton in 2015.