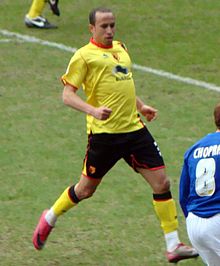 Andros Darryl Townsend (born 16 July 1991) is an English professional footballer who plays as a winger for Tottenham Hotspur and for the England national team. A product of the Spurs academy, Townsend had loan spells with nine different clubs before gaining a regular first team place for Spurs in the 2013–14 season.