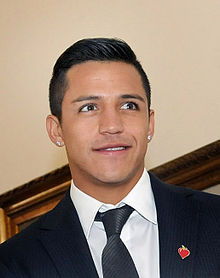 After his debut season of first-team football with Cobreloa, Sánchez was signed by Italy's Udinese Calcio in 2006. Following successful loans at Colo-Colo and River Plate, he began playing in Serie A. In 2011, he was signed by Barcelona for £25 million, becoming the most expensive transfer in Chilean football history. Sánchez signed for Arsenal in July 2014 for a fee reported to be around £35 million, making him the second-most expensive signing in the club's history after Mesut Özil.