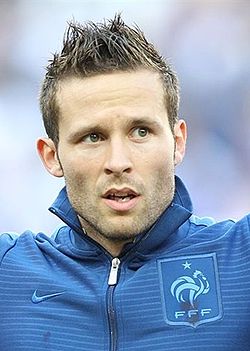 Yohan Cabaye (French pronunciation: ​[jɔ.an ka.baj]; born 14 January 1986) is a French professional footballer who plays as a central midfielder for English club Crystal Palace and the France national team. He is described as a player who possesses "excellent vision, great ball control", and "provides technical quality". Cabaye is also known for his free-kick and penalty-taking ability.

Cabaye began his football career playing for hometown club Tourcoing FC at the age of six. After seven years developing in the club's youth academy, he joined professional club Lille. Cabaye spent six years in the club's youth academy before making his professional debut in the 2004–05 season helping Lille win the 2004 UEFA Intertoto Cup. He became a regular starter in the following season and participated in the UEFA Champions League for the first time under Claude Puel. Under manager Rudi Garcia, Cabaye developed into a playmaker and had his best season to date in the 2009–10 season scoring over 15 goals from the midfield position. In the 2010–11 season, he was a part of the Lille team that won the league and cup double. Following the season, in June 2011, Cabaye joined English club Newcastle United on a five-year deal. On 29 January 2014, Newcastle accepted a £19 million offer for Cabaye from French Ligue 1 champions Paris Saint-Germain. Cabaye joined, signing a three-year contract with the club. On 10 July 2015 he joined Crystal Palace.