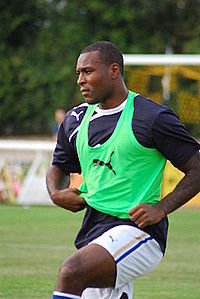 Westley Nathan "Wes" Morgan (born 21 January 1984) is a professional footballer who plays as a defender for Leicester City and is a Jamaica International.

He spent a majority of his career with his boyhood club, Nottingham Forest where he had been a regular at centre-back for the club for several years before moving to Leicester City in January 2012. He was Nottingham Forest's longest-serving player before his move to the King Power Stadium.