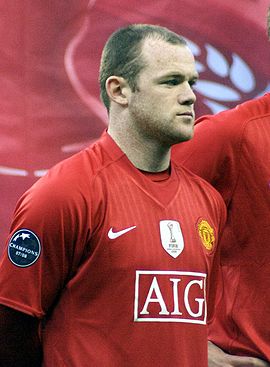 Wayne Mark Rooney /ˈruːni/ (born 24 October 1985) is an English professional footballer who plays for and captains both Manchester United and the England national team. He has played much of his career as a forward, but he has also been used in various midfield roles.

Aged nine, Rooney joined the youth team of Everton, for whom he made his professional debut in 2002 at the age of 16. He spent two seasons at the Merseyside club, before moving to Manchester United for £25.6 million in the 2004 summer transfer window. Since then, with Rooney in the team, United have won the Premier League five times, the UEFA Champions League once, the FIFA Club World Cup once and the League Cup twice. In September 2013, Rooney scored his 200th goal for United. He is currently on 233 goals, making him the club's third-highest goalscorer of all time.