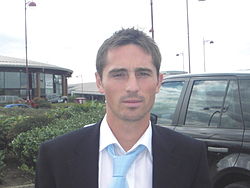 Thomas William "Tommy" Smith (born 22 May 1980) is an English professional footballer who most recently played for Brentford. He is normally used as a right winger or a striker.

Smith started his career at Watford, where his younger brother Jack was also a trainee. He played a part in Watford's consecutive promotions from the Second Division, reaching the Premier League in 1999. Although Watford were relegated in 2000, Smith represented his country at under-21 level the following season. He left Watford to join Sunderland on a free transfer in 2003, before moving to Derby County in 2004. He was voted Derby Player of the year in 2006, before re-joining Watford. After the club's relegation in his first season back at Vicarage Road, Smith's subsequent performances earned him consecutive Watford Player of the Season awards in 2007–08 and 2008–09. At the start of the following season he was sold to Premier League club Portsmouth. The club faced administration that season, and were eventually relegated. The following season, Smith joined Championship club Queens Park Rangers, becoming a regular in a team challenging for promotion to the Premier League. Smith joined Brentford in the summer of 2014, spending one season there where he helped them to the Championship play-offs.