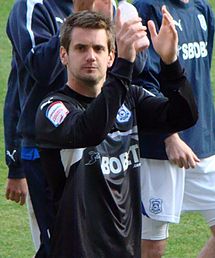 Thomas David "Tom" Heaton (born 15 April 1986) is an English professional footballer who is the captain and goalkeeper for Burnley.

He began his professional career with Manchester United but was unable to break into the first team and spent time on loan with Swindon Town, Royal Antwerp, Cardiff City, Queens Park Rangers, Rochdale and Wycombe Wanderers, before joining Cardiff permanently after his release by Manchester United in July 2010. He then joined Bristol City on a one-year deal with an option of a second year but turned it down in May 2013 in favour of a move to Burnley, whom he has represented in the Premier League.