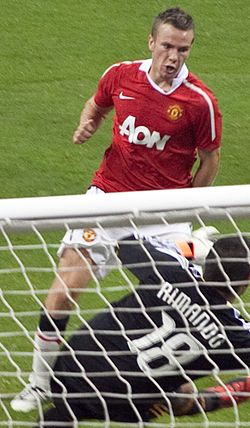 Thomas William "Tom" Cleverley /ˈklɛvəli/ (born 12 August 1989) is an English footballer who plays as a midfielder for Everton and the England national team.

After starting his career in the youth set-up at Bradford City, Cleverley joined Manchester United at the age of 12. Between 2007 and 2009 he played for Manchester United's reserve team, and occasionally in first team friendly matches. Cleverley was loaned to League One side Leicester City at the start of 2009, for whom he made his first Football League appearances, helping the team secure the League One title and promotion to the Championship. He spent the 2009–10 season on loan with Watford in the Championship, where he scored 11 goals in 33 league games and was voted as their Player of the Season. On 31 August 2010, he joined Wigan Athletic on a season-long loan, where he scored four goals in 25 appearances and helped them to avoid relegation on the final day of the season. He returned to Manchester United for the start of the 2011–12 season and made his first competitive appearance in the Community Shield victory against Manchester City.