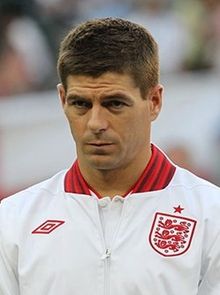 Steven George Gerrard, MBE (born 30 May 1980) is an English professional footballer who plays for American club LA Galaxy. He spent the majority of his career playing for Premier League club Liverpool, with most of that time as their captain. He has played much of his career as a central midfielder, but has also been used as a second striker, holding midfielder, attacking midfielder, right back and right winger.

Gerrard spent 17 seasons at Anfield, making his Liverpool debut in 1998, cementing his place in the first team in 2000, and succeeding Sami Hyypiä as team captain in 2003. His honours include two FA Cups, three League Cups, one UEFA Champions League, one UEFA Cup, and two UEFA Super Cups. He joined Major League Soccer club LA Galaxy in July 2015, following the conclusion of the 2014–15 season with Liverpool.