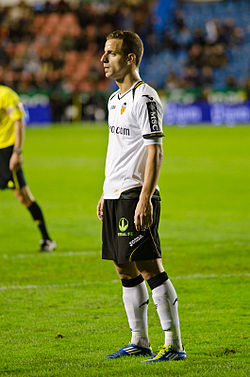 Roberto Soldado Rillo (Spanish pronunciation: [roˈβerto solˈdaðo ˈriʎo]; born 27 May 1985) is a Spanish professional footballer who plays for Villarreal CF and the Spain national team as a striker.

After emerging through Real Madrid's youth system, he went on to appear in only 27 official games for the first team (four goals). However, he became a more regular La Liga player and goalscorer for Osasuna, Getafe, and Valencia, and secured a £26 million move to Tottenham Hotspur. After two unsuccessful seasons in England, he returned to the Spanish top division with Villarreal.