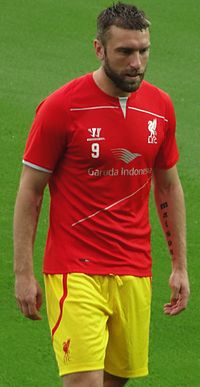 Rickie Lee Lambert (born 16 February 1982) is an English professional footballer who plays as a striker for Premier League club West Bromwich Albion and the England national team. He has won a number of personal awards, including three league Golden Boots. Lambert is known for his large stature and physical performances, drawing comparisons with Southampton legend Matthew Le Tissier for his ability in front of goal and penalty record.

He began his career at Blackpool, having been previously dropped by Liverpool as a youngster, and played in The Football League with Macclesfield Town, Stockport County, Rochdale, Bristol Rovers before joining Southampton for over £1 million in 2009. Lambert proved a key signing for Southampton, becoming their top scorer as they were promoted to the Championship from League One in 2011 and to the Premier League the following season, scoring 117 goals for the team across all competitions. After a season back at Liverpool, he joined West Bromwich Albion in 2015.