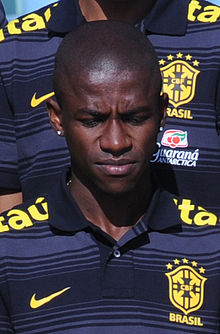 Ramires Santos do Nascimento (Brazilian Portuguese: [ʁaˈmiɾes ˈsɐ̃tus du nasiˈmẽtu]); born 24 March 1987), known simply as Ramires, is a Brazilian professional footballer who plays for English club Chelsea and the Brazil national team. A midfielder, he is comfortable playing in either the centre or right midfielder position. He normally plays as a box-to-box midfielder role because of his energy in supporting defensive and offensive play. His attacking and defensive mentality have led to comparisons to former Chelsea teammate Michael Essien.

Ramires began his career playing for Royal Sport Club. In 2005, he signed for Joinville, before joining Cruzeiro, whom he spent just over two seasons with, appearing in 61 league matches and scoring 10 times. In 2009, Ramires moved to Portugal and signed for Benfica from Cruzeiro. He spent one season with Benfica in which he helped them to the Primeira Liga title, five points clear of second-placed Braga. He then joined English club Chelsea in the summer of 2010 on a four-year contract, and has since won five different domestic and European competitions with them.