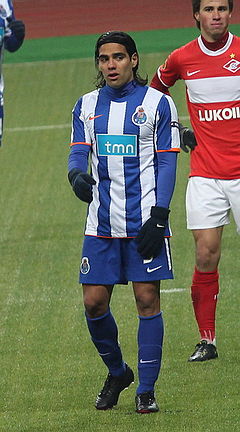 Radamel Falcao García Zárate (Spanish pronunciation: [raðaˈmel falˈkao]; 10 February 1986), also known as Radamel Falcao, Falcao García or simply as Falcao, is a Colombian professional footballer who plays as a striker for English club Chelsea, on loan from French club Monaco, and the Captain of the Colombia national team. He is sometimes nicknamed El Tigre (Spanish for The Tiger) and King of the Europa League.

Falcao was commonly cited as one of the best strikers in the world. He surpassed Jürgen Klinsmann's record of 15 goals (17) in a single annual club football European competition UEFA Champions League/UEFA Europa League campaign in 2011. He also played a key role in guiding Porto to a second Europa League title, as well as finishing undefeated in the 2010–11 Primeira Liga season. In July 2011, Falcao received the Portuguese Golden Ball award, becoming the first Colombian to do so.[16] He came fifth in the 2012 FIFA Ballon d'Or and was named in the FIFA XI for 2012.