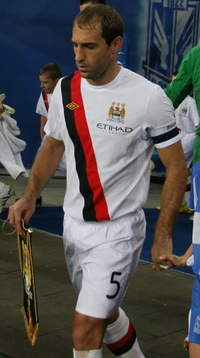 Pablo Javier Zabaleta Girod (Spanish pronunciation: [ˈpaβlo saβaˈleta]; born 16 January 1985) is an Argentine professional footballer who plays as a right back for Manchester City and the Argentina national team. Zabaleta can operate on both sides of the pitch as a full-back and is known for his tenacious style of play, and has captained his club on numerous occasions.