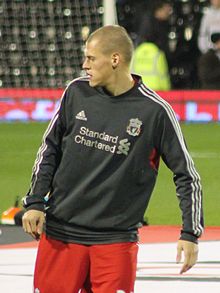 Martin Škrtel (Slovak pronunciation: [ˈmartɪn ˈʃkr̩cɛl]; born 15 December 1984) is a Slovak professional footballer who plays as a centre back for English club Liverpool and captains the Slovakia national team.

He previously played for Trenčín and Zenit Saint Petersburg, before joining Liverpool for £6.5 million in January 2008. He has won the Russian Premier League and the Football League Cup, as well as being named Slovak Footballer of the Year four times.