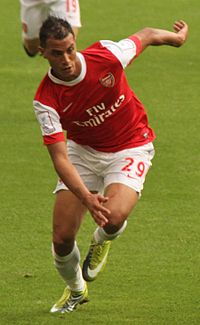 Marouane Chamakh (French pronunciation: ​[ma.ʁwan ʃa.mak] ; Arabic: مروان الشماخ‎; born 10 January 1984) is a Moroccan footballer who plays for Crystal Palace and the Morocco national team as a striker. He is described as a prototypical target man and is noted for his "tall stature" and "excellent heading ability".

Chamakh started his career training throughout various clubs in the Aquitaine region. In 2000, he signed with Bordeaux. Chamakh made his professional debut for the club in the 2002–03 season. He spent nine years at the club and helped Bordeaux win the Coupe de la Ligue in 2007. In the 2008–09 season, Chamakh won his first league title as Bordeaux were crowned champions for the first time since the 1998–99 season. The club also won the Coupe de la Ligue completing the league and league cup double. In May 2010, Chamakh joined Arsenal of the Premier League on a free transfer after agreeing to a four-year contract with the club. In October 2010, Chamakh became the first player in UEFA Champions League history to score in six consecutive matches.