Other Midfielders playing in Chelsea 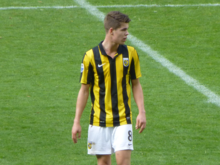 Van Ginkel began his career in the youth ranks of Vitesse, joining the Arnhem-based club as a seven-year-old in 1999. After making his way through the various youth levels at the club, Van Ginkel debuted for the senior team in 2010 before sealing a transfer around £9 million to Chelsea in 2013. He suffered a serious knee injury early into his Chelsea career which ruled him out for 7 months. He then went on season-long loans to Milan in 2014–15 and Stoke City in 2015–16.