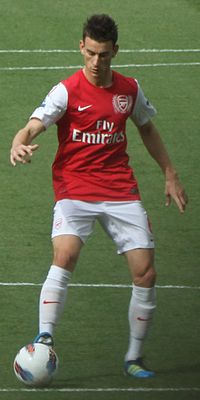 Laurent Koscielny (French pronunciation: ​[loˈʁɑ̃ kosjɛlˈɲi]; born 10 September 1985) is a French footballer who plays as a defender for Arsenal and the French national team. He primarily plays as a centre back but he can also play as a right back, a position where he started his career. He has been described as an aggressive, strong, quick and ball-playing defender.

Koscielny was born in the city of Tulle and began his football career playing for a host of amateur and youth clubs such as Brive, Tulle Corrèze and Limoges. In 2003 he moved to Guingamp, where he made his professional debut the following year. Koscielny joined Tours for an undisclosed fee to play in the third tier of the French league in 2007 and enjoyed promotion with his new side before being named in the Ligue 2 Team of the Season the following campaign. In 2009, newly promoted Ligue 1 side Lorient signed Koscielny for around €1.7 million, and his performances caught the eye of Arsenal manager Arsène Wenger, who signed him in 2010. Arsenal fans voted Laurent Koscielny as Wenger’s most effective signing of 2010–11 following an impressive debut campaign.