Other Goalkeepers playing in Wolverhampton Wanderers 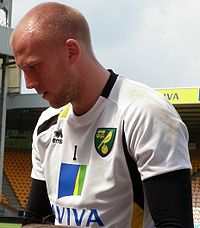 John Thomas Gordon Ruddy (born 24 October 1986) is an English professional footballer who plays for Norwich City and the England national team as a goalkeeper. While being a good and reliable shot-stopper, he also has a reputation for being a dominant keeper, commanding his box on crosses and set pieces.

Ruddy began his career at Cambridge United, before signing for Everton as a 19-year-old. He spent five years with Everton, but made just one appearance, while playing on loan at nine different clubs. Ruddy was signed by Paul Lambert to play for Norwich in 2010 and, in his first season, was part of the team that finished second in The Championship, gaining promotion to the Premier League. The following year, Norwich finished twelfth in the Premier League, and Ruddy was selected by new England manager Roy Hodgson for the squad for Euro 2012. However, on 25 May 2012, he was ruled out after breaking his finger during training. He made his debut in a 2–1 win against Italy in August 2012. He suffered a long term thigh injury in November 2012, but returned to help Norwich to an 11th-place finish at the end of the 2012-13 Premier League season.