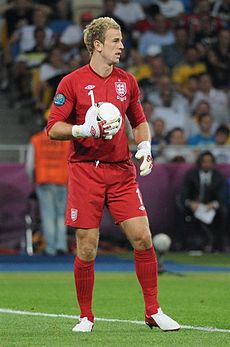 Charles Joseph John "Joe" Hart (born 19 April 1987) is an English professional footballer who plays as a goalkeeper for Premier League club Manchester City and the England national team. With over 100 Premier League clean sheets, Hart holds the record for the most Premier League Golden Glove awards (four) and has amassed over 50 international caps since his debut in 2008.

He began his career at his hometown club Shrewsbury Town in the Conference and League Two. In 2006, he moved to top-flight Manchester City, having attracted the attention of several Premier League teams. He spent time on loan at Tranmere Rovers and Blackpool in his first season, before spending the 2009–10 season at Birmingham City. Hart was nominated for the PFA Young Player of the Year and was voted as the Premier League goalkeeper of the 2009–10 season in recognition of his performances at Birmingham. He returned to Manchester City for the 2010–11 season and won the Barclays Golden Glove for keeping the most clean sheets throughout the Premier League season. Hart replicated this feat in the 2011–12 season and was a key player during City's title-winning campaign. He won the Golden Glove for the third year in a row in the following season, and earned a second Premier League title in 2014. In 2015, Hart once again won the Golden Glove award for the fourth time in five years.