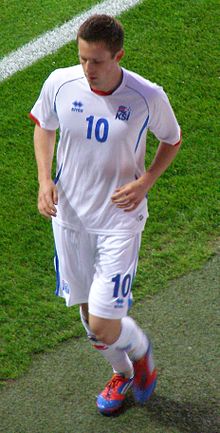 Gylfi Þór Sigurðsson (born 9 September 1989) is an Icelandic professional footballer who plays as a midfielder for Premier League club Swansea City. He is a specialist on set-pieces and possesses great long-range shooting ability.

He began his professional career with Reading in the Championship, and in 2010 was sold to Hoffenheim in Reading's biggest sale. He was voted player of the season for two consecutive seasons for Reading in 2009–10 season and for Hoffenheim in 2010–11. After a season back in English football with Swansea he joined Tottenham Hotspur for £8.8 million, and in 2014 moved back to Swansea as part of an exchange for Ben Davies.