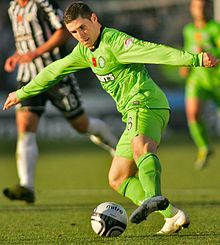 Gary Hooper (born 26 January 1988) is an English professional footballer who plays as a forward for Norwich City.

Hooper started his career at non-League Grays Athletic in 2003. While there he won the 2004–05 Conference South, as well as the FA Trophy twice in 2005 and 2006. After this Championship club Southend United signed him on a free transfer in 2006. He was loaned out twice by the club, on a three-month loan to League One club Leyton Orient in 2007 and a six-month loan to League Two club Hereford United in 2008. Scunthorpe United signed him in 2008, for a fee of £175,000. After two years he was signed by Scottish Premier League side Celtic for £2.4 million. In his first season with the club he was the top scorer and also won the 2011 Scottish Cup.