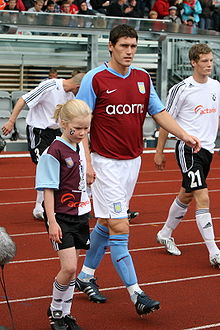 Gareth Barry (born 23 February 1981) is an English footballer who plays as a midfielder for Everton. He has made 562 appearances in the Premier League, including 365 for Aston Villa.

Barry moved to Aston Villa from Brighton & Hove Albion as a youngster, and spent 12 years at the club. He captained Aston Villa and is ninth in their all-time list of appearances. In June 2009, he joined Manchester City, where he won the FA Cup in 2011 and the Premier League title the following season. After a season on loan, he joined Everton on a 3-year contract in July 2014.