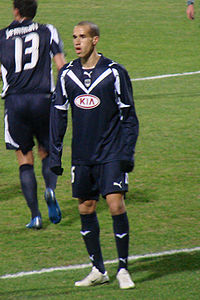 Gabriel Antoine Obertan (born 26 February 1989) is a French professional footballer who plays for English club Newcastle United. He plays primarily as a winger, but can also play attacking midfield and as a striker.

A former attendee of the famous Clairefontaine academy, Obertan began his professional career playing for Bordeaux in France. He then joined Manchester United in July 2009 for an undisclosed fee, before signing for Newcastle United for another undisclosed fee in August 2011.