Other Goalkeepers playing in Southampton 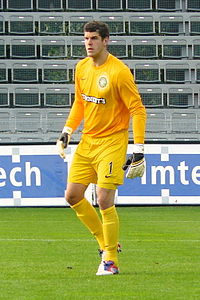 Fraser Gerard Forster (born 17 March 1988) is an English footballer who plays as a goalkeeper for Premier League club Southampton.

He started his career with Newcastle United and had brief loan spells with Stockport County and Bristol Rovers. He then spent a successful season on loan at Norwich City, helping the club win the League One title and promotion to the Championship. Forster then joined Celtic on loan for the 2010–11 season, and helped them win the Scottish Cup. He spent a further season on loan there, winning the Scottish Premier League before becoming a permanent squad member in 2012 in a £2.2 million transfer. Forster won many plaudits for his performances at Celtic and holds the Scottish top division record of 1,256 minutes without conceding a goal. In August 2014, he joined Southampton for an estimated £10 million.