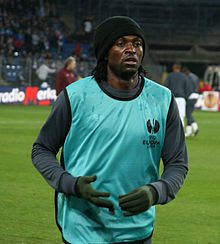 Adebayor represented the Togo national football team at the 2006 FIFA World Cup in Germany, the country's début, and to date only, appearance at the World Cup. In January 2010, Adebayor was one of the players involved when the Togo team's bus came under gunfire on the way to the 2010 Africa Cup of Nations in Angola, after which he retired from national team duty. In 2013 he returned to the Togo team for the 2013 African Cup of Nations in South Africa, where he helped them to qualify for the quarterfinals. He is currently Togo's all-time top goalscorer with 28 goals.