Other Midfielders playing in Everton 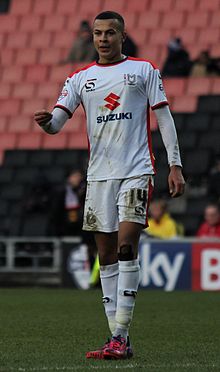 Bamidele Jermaine "Dele" Alli (born 11 April 1996) is an English professional footballer who plays as a midfielder for Tottenham Hotspur in the Premier League. Born in Milton Keynes, he joined the youth system at MK Dons aged 11 and broke into the first team five years later, during the 2012–13 season. Over the next two-and-a-half years he made 74 league appearances for MK Dons, scoring 22 goals, and played for the England U17, U18 and U19 teams. He signed for Tottenham in February 2015 for an initial fee of £5 million.