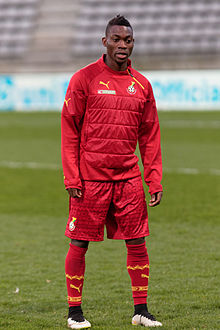 Christian Atsu Twasam (born 10 January 1992) is a Ghanaian professional footballer who plays for Bournemouth on loan from Chelsea and the Ghanaian national team. He primarily plays as a winger, although he has also been deployed as an attacking midfielder.

He began his career with Porto, also spending a season on loan at Rio Ave. In 2013 he was signed by Chelsea for £3.5 million, who have loaned him to Vitesse, Everton and Bournemouth.