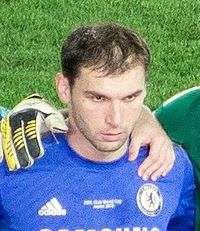 Branislav Ivanović (Serbian Cyrillic: Бранислав Ивановић, pronounced [brǎnislaʋ iʋǎːnoʋitɕ]; born 22 February 1984) is a Serbian professional footballer who plays for English club Chelsea and the Serbia national team, which he captains. He is a versatile defender who usually plays at right-back or as a right-sided centre back.

Ivanović started his career at hometown club FK Srem before transferring to top division side OFK Beograd in January 2004. Two years later, he moved to Russia to play for Lokomotiv Moscow in the Russian Premier League, winning the 2007 Russian Cup. He signed for Premier League side Chelsea for a £9 million fee in January 2008, where he has since made over 300 appearances in all competitions. His honours at Chelsea include two league titles and the UEFA Champions League in 2012, and he has twice been named in the PFA Team of the Year.