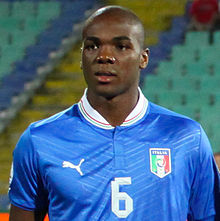 Angelo Obinze Ogbonna (born 23 May 1988) is an Italian professional footballer who plays as a centre back for West Ham United and the Italian national team.

He began his career at Torino, with whom he made his debut in Serie A at age 18 under Alberto Zaccheroni. After a loan spell at Crotone in Serie C1, he returned to Torino, with whom he played for a further five seasons. In July 2013 he transferred to city rivals, Juventus, winning the Scudetto in 2013–14 and 2014–15, the 2013 Supercoppa Italiana and the 2014–15 Coppa Italia.