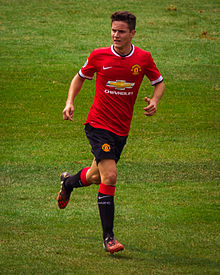 Ander Herrera Agüera (Spanish pronunciation: [ˈandeɾ eˈreɾa aˈɣweɾa]; born 14 August 1989) is a Spanish professional footballer who plays as a central midfielder for English club Manchester United. He began his career at Real Zaragoza before moving to his home-town club Athletic Bilbao in 2011, and then to Manchester United for €36 million in 2014. He has also won tournaments with Spain at Under-20 and Under-21 level and represented the nation at the 2012 Olympics.