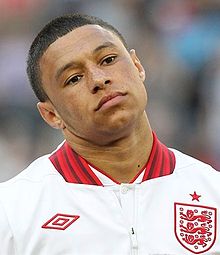 After rising to prominence with Southampton during the 2010–11 season aged 17, he signed for Arsenal in August 2011. Scoring twice in his first three games for the club, Oxlade-Chamberlain became the youngest English goal scorer in UEFA Champions League history and has also claimed a regular place in the England Under-21s team. Fans have nicknamed Oxlade-Chamberlain "The Ox", derived from the first part of his surname, as well as his physical tenacity and powerful playing style.