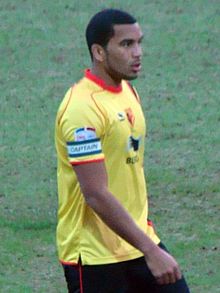 Adrian Joseph Mariappa (born 3 October 1986) is an English-born Jamaican professional footballer who plays as a defender for Crystal Palace. He progressed through Watford's youth academy, and started playing for the first team in the 2005–06 season. Although primarily a centre back, he spent some of his early professional career at right back due to competition for places in the middle. He made 247 first team appearances for Watford, including 19 in the Premier League. This included a run of 113 consecutive league appearances, the fourth longest streak in Watford's history. Mariappa captained Watford at under-18, reserve and first-team levels, and was the club's vice captain in his final few years at Vicarage Road. Mariappa accepted his first call up to Jamaica's international team in May 2012. He won his first cap against Guyana later that month, and transferred to Premier League side Reading in July 2012. He made 29 league appearances for the club before joining Premier League side Crystal Palace in September 2013, following Reading's relegation to the Championship.