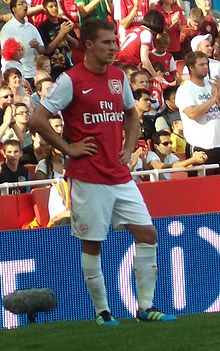 Aaron James Ramsey (/ˈræmzi/; born 26 December 1990) is a Welsh footballer who plays as a midfielder for Arsenal and the Wales national football team. Ramsey mainly plays as a box-to-box midfielder, but has also been deployed on the left and right wings. He played as a schoolboy for Cardiff City, where he spent eight years in youth football, became the club's youngest ever first team player, and made 22 appearances for the senior team – including the 2008 FA Cup Final.

Ramsey moved to Arsenal in 2008 in a £5 million deal, where he quickly gained first team experience. However, his career stalled significantly after he suffered a broken leg in a match against Stoke City in February 2010. After two loan spells away from Arsenal, he returned to full fitness and re-established himself as a regular starter during the 2011–12 season. Ramsey was a key player for Arsenal in the 2013–14 season campaign, scoring 16 goals in all competitions, including the winner in the 2014 FA Cup Final.