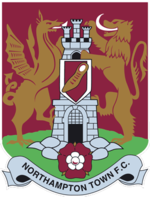 Northampton Town Football Club /nɔrˈθæmptən ˈtaʊn/ is an English professional football club based in Northampton, Northamptonshire. The club participates in Football League Two, the fourth tier of English football. They hold the record for the shortest time taken to be promoted from the bottom tier to the top tier and relegated back down to the bottom again, in the space of nine years.

Northampton were formed in 1897, after meetings between the town’s schoolteachers and local solicitor A.J. Darnell. They play their home games at the 7,653 capacity all-seater Sixfields Stadium, having moved in 1994 from the County Ground which they shared with the owners, Northamptonshire County Cricket Club. The club’s main rival is Peterborough United, a rivalry which has endured since the 1960s, although the two teams are currently separated by one division. Other recent rivals include Rushden & Diamonds and Oxford United. The club's colours have traditionally been claret and white. The club nickname is "The Cobblers", a reference to the town's historical shoe-making industry.

Show me more statistics about Northampton Town with

Northampton Town was on 21 position during the following seasons: