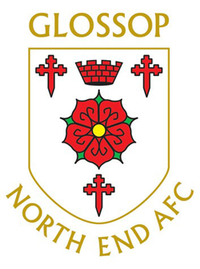 Glossop North End A.F.C. are an English football club in Glossop, Derbyshire. Formerly members of the Football League, they are currently in the Northern Premier League Division One North and are members of the Derbyshire County Football Association. They play their home matches at Surrey Street, which has a capacity of 1,350 (209 seated, 1,141 standing). The club play in blue, and are known as the Hillmen. Between 1899 and 1992 the club were known as Glossop.

Glossop was, before Rushden and Diamonds and Fleetwood Town, often cited as the smallest town in England to have had a Football League club: it still is the smallest town whose team has played in the English top flight. At the turn of the 20th century, Glossop played in Division One, bankrolled by Sir Samuel Hill-Wood, who was later to become chairman of Arsenal, with whom the club retains connections to this day. In 2014/15 Glossop joined the ranks of Ashton United, Kidsgrove Athletic and FC United of Manchester by winning the double of both North West Counties Premier League and League Challenge Cup.

Show me more statistics about Glossop with

Glossop was on 18 position during the following seasons: