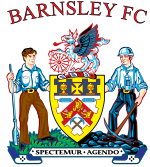 Barnsley Football Club is a professional English football club based in the town of Barnsley, South Yorkshire. Nicknamed the Tykes, they were founded in 1887 by Reverend Tiverton Preedy under the name Barnsley St. Peter's. The club colours are red and white, and their home ground since 1888 has been Oakwell. The club currently plays in League One, the third tier in the English game.

Barnsley have spent more seasons in the second tier of English football than any other club in history and have produced some notable talents over the years who have gone on to be successful at other clubs. One example is Tommy Taylor, who was a prolific goalscorer for Barnsley in the early 1950s and went on to win two league titles with Manchester United (as well as scoring 16 times in 19 England internationals) before losing his life in the Munich air disaster. Taylor's move to Manchester United was for a then world-record fee of £29,999.

Show me more statistics about Barnsley with

Barnsley was on 19 position during the following seasons: